At the end of the school year last year, Tabitha Johnson brought this project to me, asking if I would be interested in doing it. The project she introduced is the Global Read Aloud.

On their Wiki Page, they explain the history and the premise of the GRA:

“The project was created in 2010 with a simple goal in mind; one book to connect the world. Now with three years under our belt and more than 30,000 connections made, we realize we are on to something larger than us so we look forward to continuing the global connections.

The premise is simple; we pick a book to read aloud to our students during a set 6-week period and during that time we try to make as many global connections as possible. Each teacher decides how much time they would like to dedicate and how involved they would like to be. Some people choose to connect with just one class, while others go for as many as possible. The scope and depth of the project is up to you. In the past we have used Twitter, Skype, Edmodo, our wiki, email, regular mail, Kidblog, and any other tools we can think of to make these connections. Teachers get a community of other educators to do a global project with, hopefully inspiring them to continue these connections through the year.”

The idea was instantly appealing to me. Since I was leaving my current school, what an amazing way for me to keep in touch with them! So I agreed and quickly signed up. The book for my grade level is Marty Mcguire by Kate Messner. 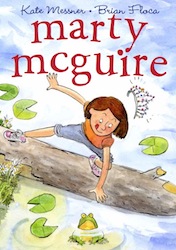 As the start date neared, and as I looked for other classes to collaborate with, I found myself finding a group on Edmodo. It was a group for teachers who have never participated in the GRA and wanted to find others to collaborate with.  This was a great starting point for me to see what people were thinking and a great space for my students to begin practicing being a positive digital citizen on a social network.

So this is where I begin to feel like I failed… (maybe). I joined this wonderful group where all the participants were happily posting things online, sharing resources, and having their students share out ideas. I got my students to join Edmodo and join this group, I also posted a few questions here and there, declining Skype opportunities because of time zone constraints, and slowly, I started participating in this environment less and less. So here, I had this opportunity to connect with a bunch of other educators at once and possibly do something big. I didn’t take full advantage of it.

Instead, I went with a more comfortable route. I personally connected with another teacher via email who was interested in starting small. We created a separate Edmodo group and had conversations with students there. My students still had the option to post comments and ideas on the first group, but this new partnership I forged with another teacher is where I spent the most time and effort. In the end, I feel like we built a relationship and are talking about collaborating further on other projects over the year. My students also feel a stronger connection to this one class because they keep hearing the same names over and over again, so after all, if I were to think about how this experience allowed my students and myself to connect with someone who is not physically close to us, maybe it was a success.

I think a lesson I learned (re-learned) from this is what I often tell other teacher who are trying to do something new. Start small. When the scale of something is too large, it can be overwhelming and you become less likely to continue or sustain it. So, when doing a collaborative project, I think I would say consider the scale of the project. How much time and effort can you commit to it? Is it manageable for you to do over a long period of time? Does it require you to do something you are not used to doing consistently? (like checking in on Edmodo posts) I think these are some important things to consider since collaboration requires maintenance and time, just like any relationship that is forged.

View all posts by Akio